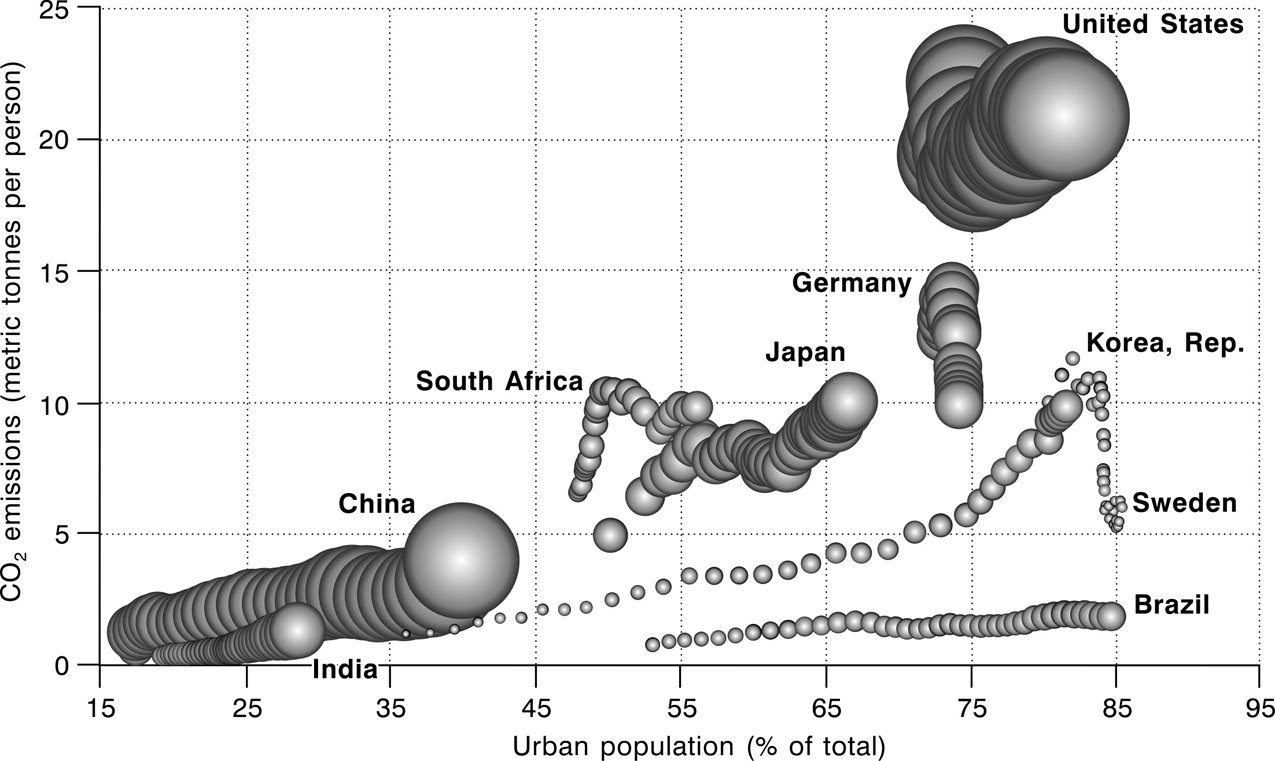 Because the Earth’s atmosphere intermixes globally, all areas of the globe are equally exposed to greenhouse gas emissions (GHGs). However, some countries are more vulnerable to the effects of these emissions, while some countries release more GHGs into the atmosphere than others. Althor et al. (2016) compare each country’s vulnerability to climate change to its creation of GHGs for the years 2010 and 2030. They found that the countries least vulnerable to climate change were higher GHG emitters, and the most vulnerable countries were least responsible for GHG emissions. By 2030 the inequity will have worsened. The authors call for climate change policies that place more responsibility for mitigating climate change on the high-emitters. END_OF_DOCUMENT_TOKEN_TO_BE_REPLACED

What has caused Tesla to follow other companies in adopting more environmentally friendly options that can decrease their carbon footprint? Diane Cardwell discusses consumers’ increasing demand for more sustainable and animal-friendly materials and its effects on Tesla’s product offerings. She notes an accelerating trend amongst car manufacturers to appear more environmentally conscientious, something people have not traditionally associated with the auto industry. This can be viewed as a response to broader consumer demand for sustainable practices. Just as veganism and its high profile public endorsement by A-list celebrities has driven the food industry and restaurants to cater to the vegan lifestyle, the auto industry now sees value to incorporating sustainable practices in their product offerings. Well-known car companies have already begun to incorporate plant-based products into their cars, but now prospective buyers of Tesla cars, already known as a luxury car brand that has proven eco-friendly does not mean performance-challenged, are demanding that Tesla take their sustainable practices one step further. END_OF_DOCUMENT_TOKEN_TO_BE_REPLACED

Jeff Tietz (2015) reports for Rolling Stone magazine on the work postdoctoral student Park Williams has been conducting in the past decade. After surveying thousands of trees, Williams created the forest-drought stress index, which determined that, due to climate change, the average forest stress caused by drought will, by 2050, surpass what it has been in the past 1000 years. Conifer forests in the Southwest United States will die, along with many other species across the globe. END_OF_DOCUMENT_TOKEN_TO_BE_REPLACED

Over the years, industrialization and urbanization have increased the amount of carbon dioxide and greenhouse gases present in our atmosphere. Obviously, these changes have affected the environment by increasing average temperatures and overall sea level, but surprisingly, climate change is also affecting wind levels. Over the past 25 years, many researchers have sought to determine whether these changes in wind speed positively or negatively effect related ecosystems. A 1990 hypothesis proposed that these winds are increasing and will positively affect the neighboring ecosystems. A synthesis of the data from experiments analyzing these patterns is the best way to see if the changes in these essential wind patterns have helped or harmed the ocean ecosystems under them. It was determined that these winds have been increasing overall, but further data must be collected to see their effects on the prosperity of the ocean ecosystems. END_OF_DOCUMENT_TOKEN_TO_BE_REPLACED

The peatlands and tundras of the Arctic perform vital ecosystem services to the earth through their ability to sequester carbon (CO2) and methane (CH4) and function as a carbon sink. The ability of the permafrost in the peatlands and tundra ecosystems of the Arctic to continue to function as a natural reservoir for carbon and methane may be disrupted by rising global temperatures that increase the rate of soil decomposition. Watts et al. (2014) integrate a terrestrial carbon flux (TCF) model to include a newly developed CH4 emissions algorithm. The new TCF model simultaneously assesses CO2 and CH4 fluctuations and the corresponding net ecosystem carbon balance (NECB), which is contingent upon gross primary productivity (GPP) subtracted from ecosystem respiration. The integrated TCF model uses data gathered through satellite remote sensors to assess fluxes in CO2 and CH4. END_OF_DOCUMENT_TOKEN_TO_BE_REPLACED

On the occasional foggy day in Claremont, one can be nearly bowled over by the smell of dairy farms—not a smell that mixes well with the usual orange blossom/eucalyptus fragrance permeating the campus of the Claremont Colleges. The smell is wafting over from the eastern South Coast Air Basin (SoCAB), which, along with California’s Central Valley is the focus of a new top-down estimate of methane emissions by Yuyan Cui  and colleagues at NOAA and the University of Colorado in Boulder, Harvard University, and the University of Michigan. Top-down estimates are based on measurements of methane made from above—in this case by aircraft—rather than based on ground-based considerations, such as counting the number of dairy cows and multiplying by how much methane each is thought to produce. One object of the study was to provide data for use by the State of California in attempting to assure that statewide greenhouse gas emissions not exceed 1990 levels by 2020. The study used some fancy inverse modeling to trace the concentrations measured aloft to their sources, and to calculate that total emission levels. The results corroborated those of several other recent studies, showing that twice as much methane is being emitted than was estimated by the USEPA in 2005, something on the order of 426 Gg (Gigagrams, millions of kilograms) per year. In the eastern SoCAB it, sure enough, is coming from the dairy cattle. In the western SoCAB, where there aren’t any, it comes from landfills, wells, and other un-described point sources. END_OF_DOCUMENT_TOKEN_TO_BE_REPLACED

Last week, in anticipation of the United Nations climate conference in New York, The Economist concluded that the single most important action to slow global warming so far has been enactment of the Montreal protocol. Say what? This isn’t on most environmentalists’ radar as an important factor. The Montreal protocol is the 1987 international agreement to save the ozone layer by phasing out Freon and other chlorofluorocarbons used in refrigeration. But these substances are powerful greenhouse gases as well as destroyers of stratospheric ozone, and the protocol caused millions of tonnes of them not to be released into the atmosphere. The article concludes that this avoided release of the greenhouse gas equivalent of 5.6 billion tonnes (bt) of CO2. This is about twice as much avoided CO2 as the next two most effective actions, global use of nuclear power (2.8 bt) and hydroelectricity (2.2 bt), and four times that of the fourth most effective action, China’s one-child policy (1.3 bt). I’m guessing that most of the 300,000 demonstrators in New York last week are not proposing an expansion of these latter three items, but their past effectiveness does make one think. The most effective actions taken specifically to reduce energy usage and CO2 emissions have been worldwide adoption of renewables (0.6 bt), US vehicle emissions standards (0.5 bt), and Brazil forest preservation (0.4 bt). The remaining 11 items on The Economist’s list are small potatoes, totaling less than 1 bt collectively. END_OF_DOCUMENT_TOKEN_TO_BE_REPLACED

Fossil fuels, while a large part of our energy production, are not a renewable resource and will eventually be depleted. Current climate models, such as the ones used by the IPCC, use levels of future fossil fuel production that Hook and Tang (2013) think are improbable. While fossil fuel combustion currently causes a large part of anthropogenic greenhouse gas emissions, these emissions are linked to fossil fuel production and will decrease as we begin to run out of these resources. There is a multitude of different scenarios that predict future fossil fuel emission and they range hugely in their predictions. The IPCC uses a set of six scenarios called the Special Report of Emission Scenarios (SRES), which are an input for many of their aggregated climate models and influence their conclusions. Hook and Tang question the accuracy of these SRES and aim to review the assumptions that the scenarios make about fossil fuel availability. END_OF_DOCUMENT_TOKEN_TO_BE_REPLACED

The amount of the powerful greenhouse gas, methane (natural gas) released into the atmosphere by farmers and gas and oil companies is substantially underestimated by the USEPA according to a team led by Scott Miller, a Harvard Ph.D. student, published late last year in the Proceedings of the National Academy of Sciences. The previously unaccounted sources are ruminants, manure, and fossil fuel extraction and processing in the South-Central US, traced back to their sources from fixed towers and aircraft-based methane sensors using the Stochastic Time-Inverted Lagrangian Transport model (STILT). On the other hand, Hristov et al.(2014), in response to the Miller et al. paper, calculated cattle methane releases from the ground up  based on the number of cattle in the US and thought that the EPA had it right in the first place. So we have a calculation based on numbers of cattle competing with empirical data from the methane sensors processed through an interesting atmospheric model. This type of atmospheric modeling–tracing airborne chemicals back to their source–is what NASA is about to use with the data from its newly launched (July 2, 2014) Orbiting Carbon Observatory, OCO-2, except that the observatory will detect CO2 rather than methane. No public data from it are available as yet, but since methane oxidizes to CO2 in the atmosphere, it is possible that the satellite will soon confirm the sources of the methane. You can find out about the OCO-2 instrument here. http://1.usa.gov/1qT3KDI

Please let me know if you are aware of new papers that should be written about by the Climate Vulture emorhardt@cmc.edu