Ocean acidification is known to have an impact on the calcified structure of many marine invertebrates. However, there is recent evidence to suggest that ocean acidification also impacts other key biological processes, such as survival, growth, and behavior. Manríquez et al. (2013) observed the impacts of ocean acidification on shell growth, survival, metabolism, and self-righting ability of a marine gastropod. The authors found there was no significant impact of ocean acidification on net shell growth, survival, or metabolism; however, increased CO2 resulted in faster self-righting times in the marine gastropod. Faster self-righting behavior can reduce the duration of vulnerability to predators and chance of being dislodged by waves of intertidal gastropods. The behavior could be a positive consequence of ocean acidification on marine invertebrates that use a turnover response as a common trait for avoid predation and wave removal. This adaptive trait could induce a co-evolution between predator and prey that would alter predator-prey dynamics within the whole intertidal ecosystem. END_OF_DOCUMENT_TOKEN_TO_BE_REPLACED

Many recent studies have suggested that the behavior of teleost coral reef fish will be highly affected by ocean acidification. While elevated CO2 reduces predator avoidance in coral reef fish, it is still unknown if elevated CO2 has the same effects on teleosts in other parts of the world. Teleosts have unique receptors that detect ambient CO2 concentrations, and therefore they might be able to avoid areas of high CO2. Jutfelt and Hedgärde (2013) investigated how long-term exposure to end of century CO2 concentrations affects CO2 avoidance and predator avoidance in juvenile teleost Atlantic cod. After six weeks of exposure to elevated CO2, fish were put in a flume and given a choice between conditions of control seawater and no predator cue versus elevated-CO2 water with predator cue. Despite the long-term exposure to elevated CO2, the cod avoided the smell of the predator, suggesting that cod may be tolerant to elevated CO2. Both treatment groups had a strong avoidance to water with high CO2, suggesting that fish similar to Atlantic cod may alter their movements and migrations in search of water with lower CO2 levels. END_OF_DOCUMENT_TOKEN_TO_BE_REPLACED

Ocean acidification is known to have significant impacts on marine invertebrates in terms of calcification and reproduction; however, the effects of increased CO2 on marine invertebrate behavior are largely unknown. Watson et al. (2014) predicted marine conch snail predator-escape behavior to its predator cone shell would be impaired with near-future CO2 levels. The authors found that the decision-making of the conch snail was in fact impaired by ocean acidification, leaving the snails more vulnerable to predation. The change in behavior was fully restored by treatment with gabazine, suggesting that changes in acid-base regulation caused by increased CO2 in the ocean interfere with the invertebrate’s neurotransmitter receptor function. These alterations in behavior in marine invertebrates could have wide-ranging implications for the whole entire marine ecosystem. END_OF_DOCUMENT_TOKEN_TO_BE_REPLACED Anthropogenic CO2 emissions are causing an increase in dissolution of CO2 into the oceans resulting in ocean acidification. Teleost fish have been thought to have a high tolerance to ocean acidification because their specialized gills allow them to regulate the pH of their blood. However, recent studies have reported strong behavioral effects of ocean acidification in tropical coral reef species. The studies found that there was a diminishment of risk-assessment, learning, lateralization, and prey detection with increased dissolved CO2. But, little is known about the behavioral changes of temperate fish under the same conditions. Jutfelt et al. (2013) observed behavioral disturbances in boldness, exploratory behavior, lateralization, and learning in temperate fish under end of century ocean acidification conditions. The findings suggest that behavioral changes from increased CO2 are not limited to sensitive tropical species and could affect fish on a global scale by the end of the century. END_OF_DOCUMENT_TOKEN_TO_BE_REPLACED 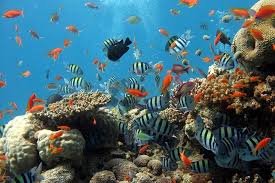 Recent research has demonstrated that exposure to elevated CO2 affects how fish observe their environment, affecting behavioral and cognitive processes leading to increased prey mortality. However, it is unknown if increased prey mortality is caused by changes in kinematics of predator-prey interactions or from just increasing prey activity levels. Allan et al. (2013) studied the effect of anticipated end of this century CO2 concentrations on the predatory-prey interaction of two tropical marine fish. Both a predator and prey fish was exposed to present day and elevated CO2 levels in a cross-factored design. The authors investigated the changes in locomotion performance, prey reaction distance, and capture success of the interaction. Authors found that predators END_OF_DOCUMENT_TOKEN_TO_BE_REPLACED

Ocean acidification is known to have physiology impacts and large ecological consequences on marine species. However, the mechanisms by which these impacts occur are somewhat unknown. Chivers et al. (2013) studied the effect of end of century CO2 concentrations on the ability of larval damselfish to learn to identify predators. The damselfish were exposed to a predator odor coupled with an alarm cue designed to stimulate learning within the fish to learn to avoid that predator. The fish were then exposed the odor a few days later to see if they had successfully learned to identify the predator. Fish were then put in the wild and the survival rate was monitored. The authors found that there was impaired neurotransmitter function within the elevated-CO2 fish. This impaired learning was reversed with gabazine, an antagonist of the GABA-A receptor—a neurotransmitter that manages risk assessment in vertebrates. Overall, elevated CO2 lead to an impairment in learning within the lab setting and also lowered fish survival rates in the wild. With lower survival as a result of impaired learning, there could be negative implications for reef population recruitment as well as changes in species dynamics with near future CO2 concentrations.–Submitted by Jennifer Fields