In a new paper about accelerated ice loss in Antarctica, Rignot et al. (2019) list the three ways: 1. the component method in which whatever data on ice and snow amounts are available at the finest resolution possible, from the smallest areas studied areas (as little as 100 meters, ranging up to 1km) are collected then added up for as many years as they are available, and the trend plotted; 2. The altimetry method which, I presume, uses satellite altimetry to figure out how much ice and snow are present based on the height above ground and sea is measured…this has a spatial resolution of 1-10km; and 3.  The gravity method (probably using the Grace satellite pairs to measure gravity changes over time owing to ice loss. The latter method can resolve centimeter-level losses but at a low resolution of 333 km. The latter two methods are relatively easy…just process satellite data…or maybe not so easy but relatively so. The component method is labor intensive, but better at pinpointing areas of loss which facilitates trying to understand what is causing the loss. Rignot used the component method.

Their results, reported widely in the news media, should be chilling.  The climate-change enhanced westerly winds in the southern hemisphere are evidently pushing relatively warm circumpolar deep water (CDW) up against the edges of the ice sheets over much of the continent and increasing their melting and calving of icebergs at much higher rates than in previous decades. The loss of ice not only increases sea level faster than anyone had thought, it allows glaciers to flow into the sea faster as well, speeding the whole process.

Not that this comes as too much of a surprise to those of us who have been following global warming, but considering the exacerbated coastal flooding that is becoming commonplace, it might be good to point out to the climate change deniers inhabiting the higher levels of our government.

When did the first ice on Earth occur? About the only way to find out is to find old rocks with evidence of glaciation then determine exactly how old they are. A type of rock characteristic of glaciation is diamictite, a conglomerate-like mix of rocks with a large range of sizes held together with clay or mud that has been metamorphosed into mudstone. The large range of intermixed sizes in these deposits indicates lack of the size sorting that occurs in a river bed or floodplain, so some other source of disruption must have occurred, one of which is being scraped off and bulldozed along by a glacier. David Zakharov at the University of Oregon with a team of scientists from around the world (Zakharov et al., 2017) reasoned that if they could find examples of this type of rock that had formed near the equator, and could demonstrate that the water the rock encountered during formation came from glacial meltwater, then, they would have proven that at the time there were glaciers near the equator.  END_OF_DOCUMENT_TOKEN_TO_BE_REPLACED

The AMOC is the set of ocean currents that begins with cold seawater off Greenland sinking to the bottom and flowing south, being replaced by warmer water flowing at the surface past Florida from the south, transferring warmth from the tropics to the east cost of North America and the West Coast of Europe. The full round trip cycle from, and back to, Greenland takes a thousand years. Without it, both western Europe and eastern North America would cool significantly, with large numbers of potential adverse effects. We know from ice core record temperature data from both the Greenland Ice Sheet (GrIS) and from Antarctic ice sheets, that the AMOC has come to an abrupt halt many times, and has characteristically taken a millennium to recover. The comparative abruptness of these cessations has led to the fear that there may be some threshold that once crossed—a tipping point—that cessation is inevitable. This would be nice to avoid. END_OF_DOCUMENT_TOKEN_TO_BE_REPLACED

Williamson et al. (2016) examined the satellite data looking for signs of a tipping point in Arctic sea ice loss, but found none (my Jan 1 post). About the same time, Notz and Stroeve (2016) looked at the same data and did a simple linear correlation between September Arctic sea ice area and cumulative CO2 emissions since 1850. Voila! There was a strong negative linear correlation between the two showing a sustained loss of 3 ± 0.3 square meters of September sea ice area per cumulative metric ton of CO2 emission. Their title summarizes the result clearly: Observed Arctic sea-ice loss directly follows anthropogenic CO2 emission. If this linear trend continues and there is no tipping point—and there is no reason to expect one—we can make a pretty good guess about the timing of the future of Arctic sea ice to the extent we can predict CO2 emission levels. At the rate we are going, September Arctic sea ice will be completely gone before mid-century (and global average temperatures will have risen more that 1.5ºC.) Furthermore, we can now get a feeling for how much our personal use of fossil fuels and the energy derived from the directly affects Arctic sea ice; the average CO2 release from personal use is several metric tons,  END_OF_DOCUMENT_TOKEN_TO_BE_REPLACED

Using a new approach to measure the extent of permafrost (permanently frozen soil), researchers have confirmed consistent widespread decline in stable permafrost that coincides with regional climate warming. This model provides greater resolution for looking at the condition of permafrost on a regional scale, and combined with other models, allows us to understand how permafrost is reacting to rising temperatures. Permafrost occupies roughly a quarter of land area in the Northern Hemisphere, over 40% of which is vulnerable to melting according to the new model. Twenty percent of permafrost land area is at a moderate risk, while 23% is facing severe degradation risk. In addition, the study found that permafrosts in boreal forests are more vulnerable than the more northern tundra permafrost. The model further confirms significant increasing regional trends of permafrost melting in the past 30 years in response to climate warming. END_OF_DOCUMENT_TOKEN_TO_BE_REPLACED

Why was a representative of the National Hockey League (NHL) in Paris for the United Nations Climate Change Conference? Journalist Kevin Blackistone met with the NHL’s vice president for corporate and social responsibility, Omar Mitchell, to discuss the NHL’s unexpected presence at the conference. According to Mitchell, climate change and water scarcity uniquely impact hockey, which at the community level depends on cold weather and fresh water. The NHL seeks to promote water restoration and other sustainable practices. In furtherance of these goals, the NHL has created an eco-friendly mandate “NHL Green” to combat climate change. END_OF_DOCUMENT_TOKEN_TO_BE_REPLACED

by Paola Salomon
According to Craig Welch (2015) there are five reasons that we need to take action on climate change. The first is the negative impact of global warming on the West Antarctic ice sheet. Since late 19th century the ocean temperature has risen, melting “a significant section of ice in the Amundsen Sea in the Southern Oceans.” Antarctica’s South Dakota-sized Thwaites Glacier has dwindled in the last decades, and once this glacier melts completely it could destabilize other areas of the West Antarctic ice sheet, causing even a more massive melt. In this case, sea levels will rise 16 feet more, affecting hundreds of millions of people. The second reason to take action is the melting permafrost. This icy frozen crust of shrubs and grass found throughout the Arctic can potentially transform the landscape into a feedback loop. END_OF_DOCUMENT_TOKEN_TO_BE_REPLACED 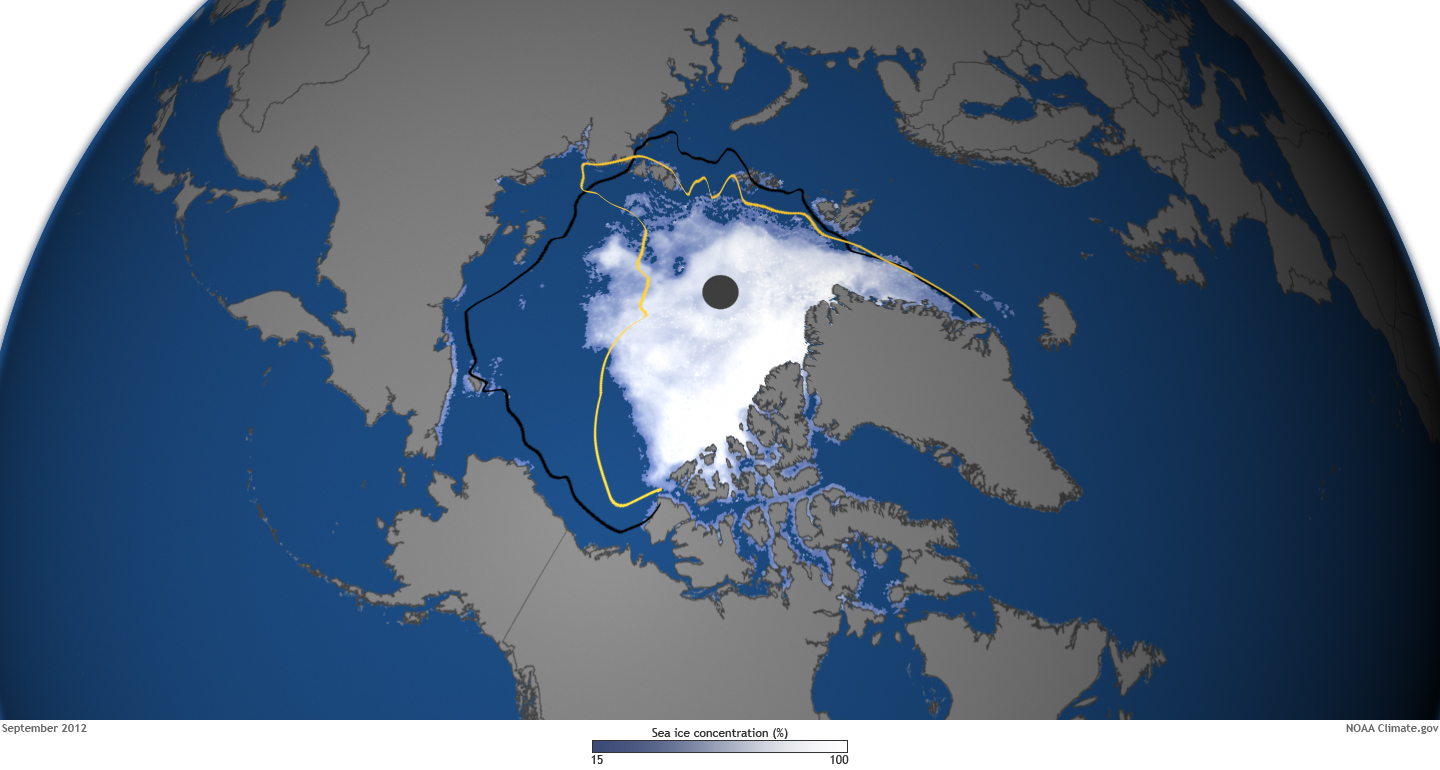 Understanding of global mean sea level during past interglacial periods has greatly improved, but many challenges remain. By using coastal records and oxygen-18 proxy data, Dutton et al. (2015) determined global mean sea level and the contribution from polar ice sheets during three past interglacial periods. Although the results were uncertain, it was determined that global mean sea level was higher than modern day levels in every interglacial period studied—the mid-Pliocene warm period 3,000,000 years ago, the marine isotope stage (MIS) 11 400,000 years ago, and MIS 5e 125,000 years ago. Previous findings were corrected by taking glacial isostatic adjustment (the adjustment of the earth for a long time after a period of deglaciation), dynamic topography, and ice sheet reconstructions into account. END_OF_DOCUMENT_TOKEN_TO_BE_REPLACED

I’ve been blogging recently about papers that claim the thousand-year cessation of global warming in the midst of the last deglaciation—known as the Younger-Dryas (Y-D)—was triggered by a comet. Buizert et al.’s (2014) paper on Y-D temperature changes doesn’t address the comet question, but another equally interesting one: why did the sudden reversal of temperature 12,800 years ago (whatever it was triggered by) cause the temperature to plunge clear back to what it was before any warming had started? That’s what the relative deuterium and oxygen-18 concentrations from the Greenland Ice Sheet ice cores imply—more about that in a moment. Nevertheless, it seemed unlikely because at the time of the Y-D, a considerable amount of CO2 had accumulated in the atmosphere and Antarctica was warming apace. The answer, according to this paper is that temperatures did not cool down so much after all; things cooled off for sure, and warming was delayed for another thousand years, but at the depth of the Y-D cooling most of Greenland was on the order of 4˚C warmer than it had been 4,000–5,000 years before—but still quite cold. END_OF_DOCUMENT_TOKEN_TO_BE_REPLACED