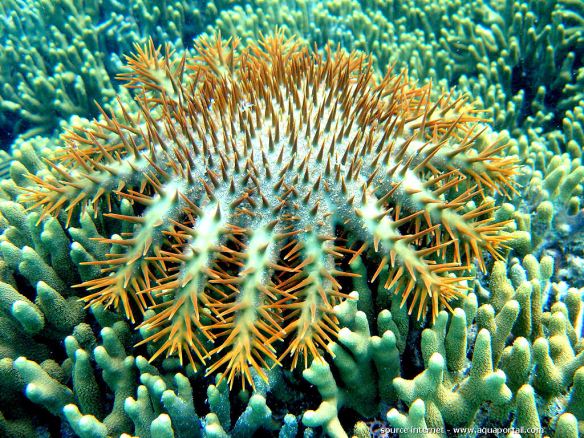 Coral reefs are regularly disturbed by natural phenomena such as bleaching, storms, and outbreaks of predators, such as the corallivorous sea star Ancanthaster planci. Corrallivores are animals that eat coral polyps. Coral reef ecosystems are resilient, and are often able to recover from large-scale disturbances quickly. However, anthropogenic stressors such as overfishing, nutrient enrichment, and sedimentation can prevent coral reefs from recovering. Nutrient enrichment, caused by terrestrial runoff, creates the perfect environment for benthic algae to grow on disturbed and broken coral reefs. Overfishing, working in tandem with nutrient enrichment, causes an overgrowth of algae if there are not enough fish to graze it, and the successive degradation of the reef. Sedimentation is also another side effect of terrestrial runoff. Sedimentation buries corals, which blocks light from reaching them and potentially stops coral recovery. However, sedimentation, when not paired with any other stressor, can also stop the growth of algae by burying surfaces for algae to grow on. Gil et. al. (2016) set out to test the interactive effects that overfishing, sedimentation, and nutrient enrichment have on coral reefs in French Polynesia. They hypothesized that these anthropogenic disturbances, when working interactively, will negatively impact corals, while promoting algal cover. END_OF_DOCUMENT_TOKEN_TO_BE_REPLACED

Biodiversity is constantly being altered by anthropogenic and natural variants. Due to ocean acidification, and rising ocean temperatures, coral reef systems have degraded, and algae has come to dominate some of these systems. Macroalgae are aggressive and quickly colonize areas where coral has been degraded, and heavy algae cover of dead coral substrates prevents recovery of dead coral communities. A study conducted by Kuempel and Altieri (2017) set out to discover how coral reefs adapt to changing environments and how individual species living along the reefs promote resilience. The presence of herbivores, such as parrotfish, sea urchins, and other small grazing fish around degraded coral reefs likely halts the shift from coral-dominated areas to algae-dominated areas. Understanding the rate of recovery for coral reef dynamics can help scientists predict future coral resiliency and aid conservation efforts.

Kuempel and Altieri studied coral reefs on the Caribbean coast of Panama after a recent hypoxic event killed over 90% of coral on some reefs in that area. They chose to study this area because it has high anthropogenic stress, increasing the chance of a higher rate of algal dominance after coral disturbances. Using field surveys, herbivore manipulation, caging, and algal transplant, Kuempel and Altieri were able to study the relationships between herbivore populations, pressures that herbivores face, and grazing importance in relation to other algal mitigating factors.

This study found that there was no correlation between mass coral reef deaths and high rates of macroalgae cover. A large number of herbivores, mostly small grazing fish and invertebrates, around dead coral areas was almost always able to prevent macroalgae from colonizing. Many species of smaller herbivores were able to escape the pressures of overfishing and effectively graze coral reefs in place of large keystone herbivores. This prevented macroalgae from aggressively colonizing places where live coral cover was very low. Initial diversity in coral reef fish species is important in degraded coral reefs to overcome anthropogenic pressures and stifle macroalgae growth. Further research must be done to determine whether grazing by small herbivores can shift a coral degraded area into a coral dominated area and how this will impact future coral resilience.

The effect of greenhouse gas (GHG) emissions on ecosystem services is a subject of major concern in climate policy and conservation. Coral reefs are considered an especially vulnerable ecosystem as they are projected to be highly affected by ocean warming and acidification, both of which are generally thought to be likely consequences of climate change. While much research has already been conducted to determine the damage coral reefs will suffer as a result of climate change, surveys of how individual countries will be affected by coral reef devastation have not yet been implemented. Wolff et al. model both in this study, showcasing projected climate stress on reefs from 1875 to 2050 alongside measures of vulnerability and equity for individual countries and regions based on GHG emissions per capita and expected reef devastation. The study finds an alarming decoupling between total GHG emissions and reef impact, indicating that, in general, countries that emit the most GHG will often experience less reef impact while the opposite is true for countries that emit very little GHG. END_OF_DOCUMENT_TOKEN_TO_BE_REPLACED

Kennedy et al. (2013) examine the structural and ecological human-caused damage on coral reefs in the Caribbean since the 1960s and then generate modeled predictions for what coral reefs in the Caribbean might look like between now and the year 2080 if practices of local conservation and global action were to be implemented. They examine driving ecological factors of Caribbean reefs, reconstructing past disturbances to address the important roles that all of the many pieces play in contributing to overall health of the reefs. Some of these disturbances between the 1960s and the 2000s include depletion of the reef due to overfishing, loss of branching corals because of disease, bleaching, and bioerosion, hyperabundance of urchins because their predators were lost to overfishing, loss of urchins because of disease, poor watershed management that has led to changes in nutrient abundance, and ongoing climate change since the 1960s. In order for a coral reef to maintain its structure, the rate at which carbonate is produced must be greater than the rate of erosion—the carbonate budget must be positive. In order to maintain a carbonate budget that is either positive or at equilibrium, Kennedy et al. suggest that local management for the protection of grazers such as parrotfishes is important and can create a positive carbonate budget for reefs starting out with higher coral cover and keep reefs with lower coral cover to begin with near equilibrium, at least in the short term. In the long term however, aggressive mitigations will need to take effect on a global scale for there to be hope of maintaining a carbonate budget near equilibrium. END_OF_DOCUMENT_TOKEN_TO_BE_REPLACED

Climate change has been impacting coral reefs all over the world, and many models have been created to predict how coral reefs are going to respond to global climate change, in particular, global warming. It has been reported that the effects of greenhouse gas emissions have reduced coral reefs resilience, causing them to be more susceptible to stressors in their environment. As a result, coral reef state, the percent of coral cover, has begun to be greatly lessened, with a noticeable shift from coral dominated environments to macroalgae environments. END_OF_DOCUMENT_TOKEN_TO_BE_REPLACED

Corals share a mutualistic relationship with algal symbionts, but with increasing sea temperatures, these symbionts become expelled from the coral. The loss of symbionts causes the corals to become bleached and there have been declines of coral cover worldwide. Recent research has shown that there may be symbionts that are thermotolerant, such as the genus Symbiodinium, which may help reduce the amount of bleaching episodes seen amongst corals. Symbiodinium is divided into nine subgeneric clades, A-I, and the Symbiodinium D1a has been documented showing thermotolerance. END_OF_DOCUMENT_TOKEN_TO_BE_REPLACED

An effect of global warming is an increase in sea-surface temperatures (SST), which impacts the distribution and range of corals. As temperatures increase, coral distribution will shift poleward. This is problematic because current marine protected areas do not take into account the distribution effects of climate change. Continual shifting of MPAs as conditions worsen is more than likely to meet political and logistical roadblocks. Makino et al (2014) established an integrative system by which to determine priority selection of habitats for MPAs. This research aims to create a process through which climate change can be factored into subsequent MPA planning, and will cater to coral distribution trends not only now but in the future as well. END_OF_DOCUMENT_TOKEN_TO_BE_REPLACED