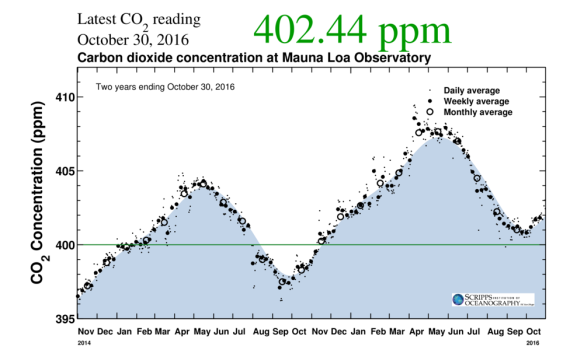 It is commonly understood that ecosystems have been taking up more carbon dioxide (CO2) as the concentration of atmospheric CO2 increases and the climate changes. The progressive increase in CO2 uptake by terrestrial ecosystems is generally thought to continue until 2030, when the trend is expected to reverse due to ecosystem damage. However, Dr. James C. Curran and Dr. Samuel A. Curran (2016) have found evidence that the trend may have already begun to reverse. They base this on analysis of the atmospheric CO2 measurements taken between 1958 and 2015 from the Mauna Loa observatory in Hawaii, known as the Keeling Curve. These data show a continual rise in atmospheric CO2 levels within a pattern of intra-annual fluctuation. The intra-annual fluctuation consists of decreased atmospheric CO2 levels throughout the summer months (Northern Hemisphere), and increased atmospheric CO2 throughout the rest of the year.

The study used polynomial regression forecasting with minimum and maximum points, in addition to a regression made from the raw data itself to look at the annual trend in CO2 drops, showing the rate of change. First, the data suggested that the Northern Hemisphere biomass has in fact begun to regress in uptake, having peaked around 2006. Second, the data suggests a slight expansion of time in which CO2 uptake takes place. Lastly, the study showed evidence for increasing variability in CO2 uptake, and thus weather patterns. All three of these conclusions indicate that there is less planetary resilience than previously assumed, and suggest even greater urgency in addressing man made emissions. The first and third conclusions are both particularly concerning, as they suggest the onset of a positive feedback loop: the decrease in CO2 uptake from bioaccumulation, resulting in greater atmospheric CO2 levels, and then decreasing the ability of terrestrial ecosystems to take in CO2. While the implications of these findings are not universally supported by several previous studies, the implications of these results make this an urgent topic to research further, as climate change could be even more serious and irreversible than we think.