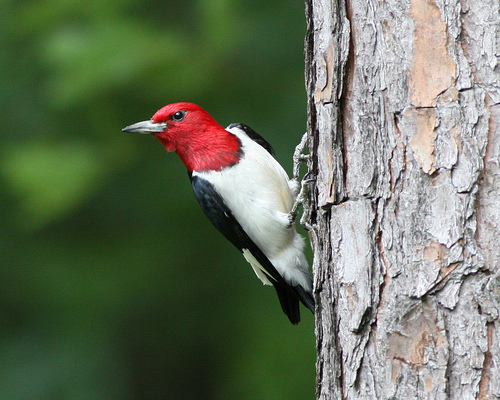 Climate change has been a pervasive issue when looking at the health and protection of endangered species. However, land- use has also been a significant factor in the decreasing population size of endangered species. Together, climate and land-use change affect habitat, behavioral patterns, phenology, and many other parts of many specie’s lives. This is especially relevant to species that have specific habitats, dietary needs, or both. If these issues are not addressed the risks of endangered species becoming extinct drastically increase. Bancroft et al. (2016) studied the affects of land use and climate change on the Red-cockaded Woodpecker (RCW) using a modeling system that allows them to analyze different predicted land-use and climate change scenarios up until the year 2100. This study looks at the RCW population in Fort Benning, which includes specific pine forests vital to the RCW survival. The authors looked at three different potential future conditions: conservation, convenience, and worst-case, to determine what types of major changes might occur in the RCW population over the remainder of the century.

Bancroft et al. used RandomForest package in R to build the predicted habitat models. They utilized the potential training maps at Fort Benning to obtain a more accurate predictor of how land use might change in the RCW habitat. In each of the three scenarios (conservation, convenience, and worst-case), several areas were further developed in the model at each ten-year point. In the maps for each scenario, new developments were added so that by 2100 all of the predicted development existed on the same map. In order to predict climate change Bancroft et al. first used the ecosystem model LPJ-GUESS to assess the potential changes in vegetation throughout the habitat using multiple different scenarios. Additionally, they explored the different changes in rainfall that could occur due to climate change. Lastly, they made a population simulation using HexSim that took into account both the projected climate and land use change. In the model, 800 RCW’s were implemented randomly throughout the habitat.

Bancroft et al. determined that the specific land-use change scenario (conservation, convenience, and worst-case) was a significant factor on how the RCW population changed. The conservation population remained similar over the 100 year time period, while the convenience scenario experienced a slight decline in the RCW population, and the worst-case scenario population was greatly impacted, showing a large decline. Overall there was a significant difference in population size between all three scenarios at the end of the simulation. However, climate change was found to have minimal effect on the populations.

Although climate change can be extremely detrimental to endangered species, Bancroft et al. reminds us that land use change is another important factor that to take into consideration when discussing conservation efforts of species. This is especially vital when looking at species with highly specific habitats, such as the RCW. It is not impossible to prevent these species from going extinct, because land use change can be done strategically and minimally as to not greatly affect the species living in these habitats.