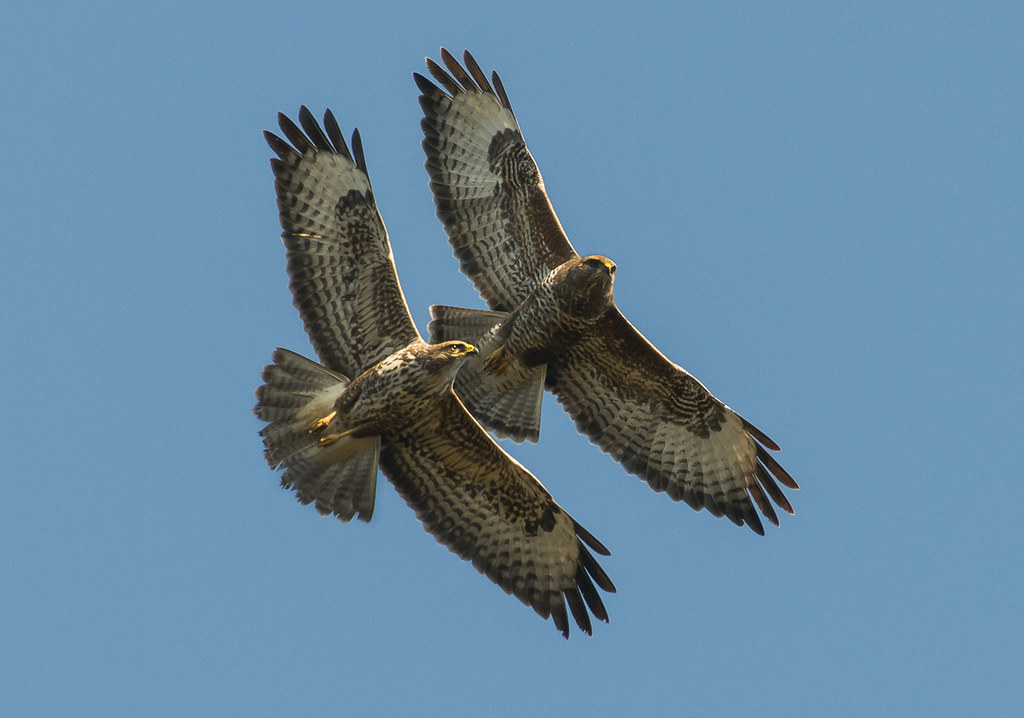 In Eastern Westfalia, Germany, the varying North Atlantic Oscillation (NAO), which characterizes atmospheric pressure in areas surrounding the North Atlantic Ocean, affects the habitat specifications of the Common Buzzard Buteo buteo, causing a range of survival factors key to this predator’s life cycle to adjust accordingly. Jonker, et al. (2014) discuss the possible factors involved in population survival rates and overall population size in four study locations including the Teutoburger forest, Kiefernheide, Ravensberger Land, and Lower-Saxony. These locations vary in humidity, foliage type, and presence of predators. The authors deduced that time, NAO, spring rainfall, availability of prey, physical appearance or morph, and birth year were the variables most responsible for survival within a buzzard population. A decrease NAO was found to be the overarching variable that ultimately affected prey availability and rainfall, and correlated closest with an increase in buzzard survival.

Rudy M. Jonker and colleagues used buzzard identification and population data collected since 1989 to determine the number of times a particular buzzard had been resighted in a breeding territory. These data comprise identification by morph and behavior, supplemented with genetic fingerprinting in more recent years. The territoriality of the species made it easy to track resightings at a breeding location. Prey availability was recorded categorically as a low, medium, or high population of voles, the most common food item for Common Buzzards. Winter weather data was given by the NAO for the years that population and survival were tracked. Spring rainfall was tracked separately because it did not correlate with NAO in the same manner as snow cover and mean temperature.

Over the study period, the researchers observed an overall decline in NAO, which provided a controlled variable against which other variables such as sex, morph, and time could be compared. Survivals of male and female buzzards at each location were calculated separately, due to differences in response to certain variables. Survival of females in Lower-Saxony increased steadily and opposite to NAO, but there was a decline in survival in all other areas. Male survival does vary among such sites, and survival rates increase opposite to NAO at each site. Jonker et al. hypothesize that this inconsistency between males and females is related to the presence of the Eagle Owl Bubo bubo in Teutoburger forest and Keifernheide. Females are more prone to predation as they incubate eggs and chicks.

Overall, populations increased consistently for the past twenty years of this study, with a more rapid increase experienced within the last ten. NAO coincides with decreases in rainfall and temperature and an increase in snow cover. The negative correlation between NAO and buzzard survival can be attributed to an increase in voles. Voles can better survive the winter with insulation from the snow. Additionally, high amounts of rain make it hard for buzzards to hunt. Vole index was not ultimately used in survival calculations because the vole population could not be accurately calculated, but the abundance of winter food is essential to the increase in survival, subsequently affecting population size.