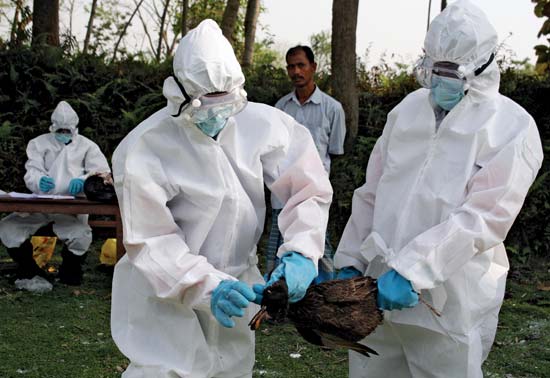 Viral sample sharing plays a vital role in preparing pre-pandemic vaccines. However, such efforts to fight diseases raise key moral questions. In 2007, competing paradigms between developed and developing nations led Indonesia to briefly stop sharing viral samples of influenza strains with the World Health Organization (WHO). Smallman examines the conflicting interests and viewpoints of the dispute and the World Health Organization’s resolution strategies. According to Smallman, developed countries framed their argument on the basis of international law that required developing countries to share samples in order to support global health security, whereas developing countries framed the dispute as a form of biopiracy that maintained neocolonial relationships. The biopiracy argument allowed Indonesia to apply pressure to international organizations by portraying them as neo-imperial agents, therefore WHO was forced to act in order to maintain their credibility. Ultimately the WHO’s Pandemic Influenza Preparedness (PIP) report, ended the dispute through its benefits sharing model and by reforming the virus sharing system. Smallman concludes that the benefits-sharing model integral to PIP will likely serve as a model for future agreements regarding similar issues in the future.

Smallman sets the stage for the dispute by highlighting the power relations between the Global North and South within the global health system. According to Smallman, wealthy countries dominated the global infrastructure of vaccine research through pharmaceutical companies, which allowed them to utilize intellectual property law under the Trade Related Aspects of Intellectual Property (TRIPS) clause of the World Trade Organization (WTO) to modify and then patent viruses extracted from developing countries, and then sell and profit from the resulting vaccine. Smallman stresses how this structure undermined the bargaining position of developing countries since their position in the production of vaccines was purely as resources, whereas developed countries owned the highly valued human invented technology. These wealthy countries were also prioritized over developing nations in terms of receiving vaccines in a timely manner and in the needed quantity. Smallman claims that vaccine manufacturers would not take orders from poorer but more populous countries due to a lack of capacity to fill such a large order. This relationship then frames developing countries as a “sacrifice zone” from which viral samples were extracted while the needs of the population were ignored, thus embodying a neocolonial structure. Smallman also cites the patenting of turmeric by the University of Mississippi Medical Center in 2005, which forced the Indian government into a long legal battle to prove that Indians had been aware of the medical benefits of turmeric long before the U.S. patent, thus making these issues of intellectual property rights quite emotional for developing nations. The framework of biopiracy became a useful tool for uniting developing countries.

Under the Convention on Biological Diversity (CBD), a document intended to protect indigenous knowledge and encourage the conservation of nature, Indonesia framed viruses as sovereign property by situating viruses as resources in the same manner as genetic plant materials. Smallman explains that under this new notion of “viral sovereignty”, viruses formed part of the biological property of the nations in which they were found. So, those nations then held exclusive rights to those viruses and the extraction of viral samplings without due compensation would be considered theft. The author claims that framing the argument in terms of power relations between Global North and South rather than as an issue of global health inequality, allowed developing countries to suggest that developed countries were actively doing something wrong rather than passively failing to provide charity. The author suggests that such an argument allowed developing countries to unite and call for a new international viral sharing system that prioritized the manufacture and availability of vaccines to countries, which were under the most serious threat from influenza outbreaks.

Smallman describes the arguments utilized by developed nations as framing health as a security issue. Indonesia’s refusal to share viral information posed a security threat that undermined the kind of global cooperation needed to overcome the next influenza pandemic. Small claims that this argument resulted in an uneasy standoff between Indonesia and the West, where the U.S. was accused of planning to use biological weapons by developing vaccines that would protect their own troops.

By 2011, WHO released a Pandemic Influenza Preparedness (PIP) report, a document that ensured that WHO would be able to continue gathering and distributing viral samples to the developed world and pharmaceutical companies in exchange for providing more benefits to developing nations. The agreement ensured these conditions by recognizing “the sovereign right of States over their biological resources…” and by creating an oversight system through the Influenza Virus Traceability Mechanism (IVTM), which allowed developing nations to track donated viral samples. Furthermore, the addition of a Standard Material Transfer Agreement, a list of requirements that mandated a certain amount of benefits, particularly funds, for developing countries shared their viral samples. WHO was also required to assist in the stockpiling of anti-virals and vaccines for developing nations.

According to Smallman, this particular dispute shows how questions of sovereignty and health care generate new perspectives on international order. He also claims that this case has three main factors that distinguish it from other disputes. First, unlike the case for most diseases there were no powerful patient advocacy groups that served as key players in the case. Second, “bioeconomics”, an effort to extract value from the molecularization of medicine, established the argument in such a way that nation-states played larger roles than pharmaceutical companies. Third, the location of the biocapital in developing nations while the manufacturing of those materials were concentrated in developed countries, shaped the debate in terms of Global North and South, so once again nation-states were key actors. Smallman also claims that an agreement largely dictated by the developing nations was possible because developed countries did not have to bear the costs of the plan and thus had little reason to oppose it, pharmaceutical companies needed an agreement in order to ensure the flow of goods and did not oppose some costs in exchange for those goods, and lastly the developed countries were able to continue to access the resources they needed.

1 thought on “Biopiracy and Vaccines: Indonesia and the WHO Pandemic Influenza Plan”