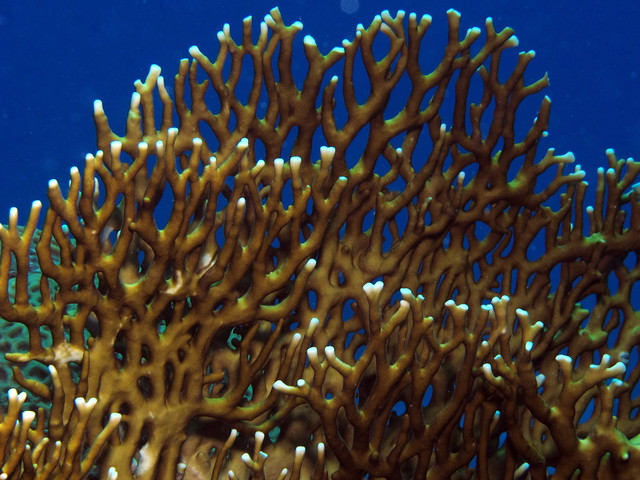 This study is an in vivo investigation of whether CO2-driven acidification of seawater causes changes in pH at the tissue-skeleton interface and rates of coral calcification. Venn et al. performed all of their experiments on 1-cm2 microcolonies of the coral Stylophora pistillata. The carbonate chemistry of the seawater in three of the four tanks used was manipulated by bubbling CO2 to reduce pH and create different levels of seawater acidity to work with. The small surface area of the samples was chosen to achieve stable pH and carbonate chemistry. Live tissue imaging of the samples was done in a perfusion chamber, where oxygen levels were maintained at a stable level. The effects of seawater acidification were measured over both short and long timescales. Calcification was measured using confocal microscopy to obtain very fine-scale measurements of the aragonite crystals themselves.

Venn et al. found that for corals that had been exposed to seawater with reduced pH for more than a year, the pH in the SCM was significantly lowered. The pH in the calcifying tissue was significantly lowered in the scenario with the most reduced seawater pH as well. Results were very similar on a much shorter timescale of only 24 hours, in which the authors found significant decreases in the pH of the SCM in the two most reduced seawater pH treatments. Statistical analysis showed no significant interaction between treatment and time. In the calcification experiment, the authors found that aragonite crystals grew significantly less in the most reduced pH treatment. The same was true when calcification was examined on a colony scale, where the corals exposed to the most acidic seawater showed a significant decrease in growth.

How calcifying organisms such as corals will respond to increasingly acidic seawater conditions will depend on their physiological ability to regulate internal pH in the fluid at the tissue level and in the calcifying cells. In this study, internal pH and calcification were both reduced significantly only at very low external seawater pH, which indicates that S. pistillata may have a relatively high tolerance to changes in seawater chemistry though they are susceptible to reduced calcifying ability in extremely acidic conditions. The calcification experiment showed agreement between the growth of individual crystals and colonies, showing significant reductions in growth at the lowest pH treatment, demonstrating a physiological tipping point after which rates of calcification rates significantly decline. This study investigates the physiological mechanisms of coral calcification in a controlled laboratory setting. The authors suggest that valuable future investigations might include similar organism-scale investigations, as well as field investigations that take into account variables that are not accounted for in the laboratory.